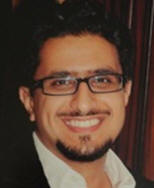 Yazeed Alaskar is currently working as an assistant professor in the National Nanotechnology Research Center at King Abdulaziz City for Science and Technology (KACST).  He is also working as principal investigator at the Center of Excellence for Green Nanotechnologies (CEGN) at UCLA.

Dr. Alaskar has more than seven years of experiences on the molecular beam epitaxial growth and characterization of nanoscale materials as well as realization of novel optoelectronic devices. His research interests include epitaxial growth of III/V semiconductors, optoelectronic devices and lasers. In addition, he is interested in commercializing novel technologies and transitioning them from the lab to market.